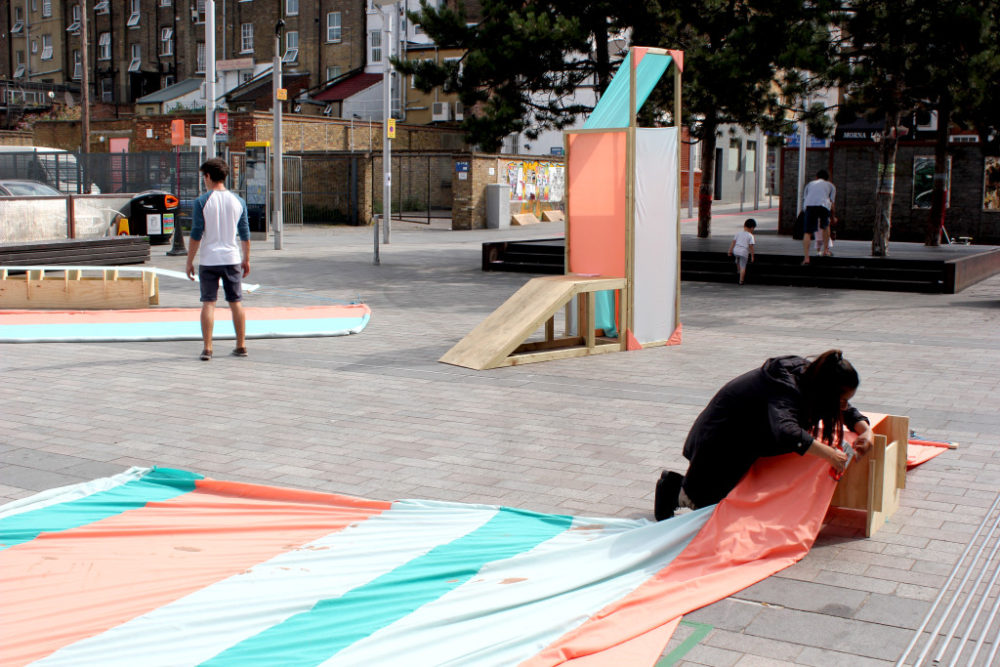 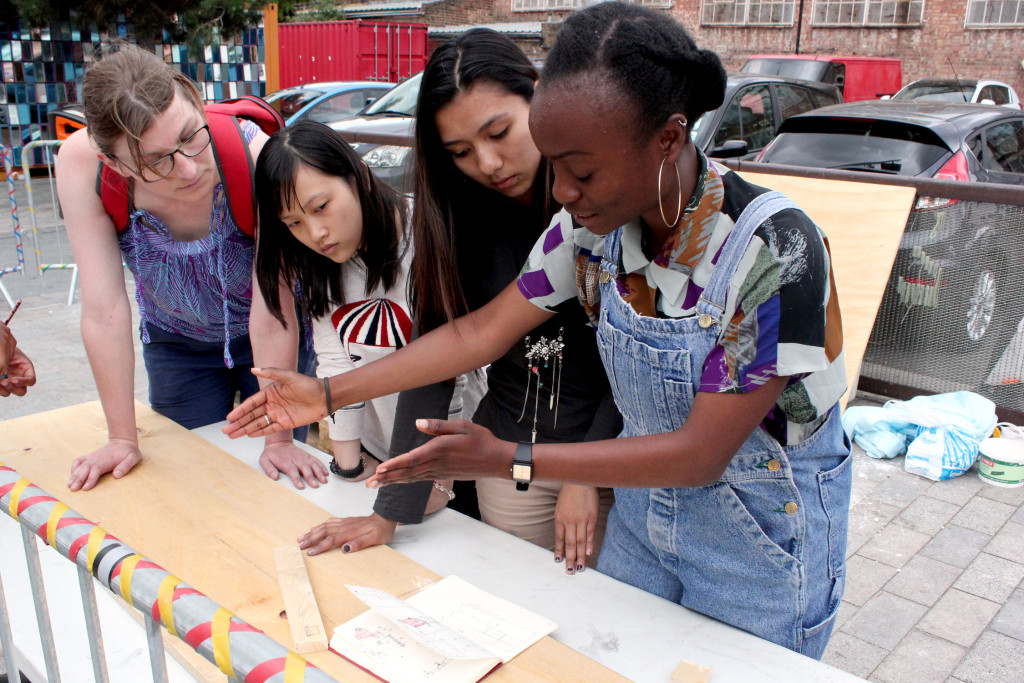 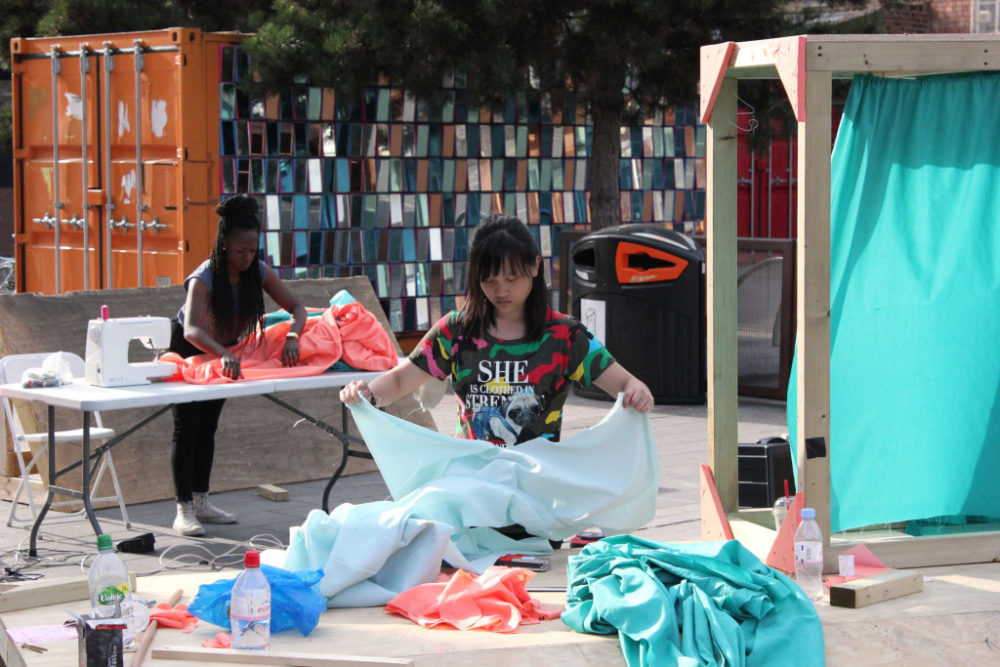 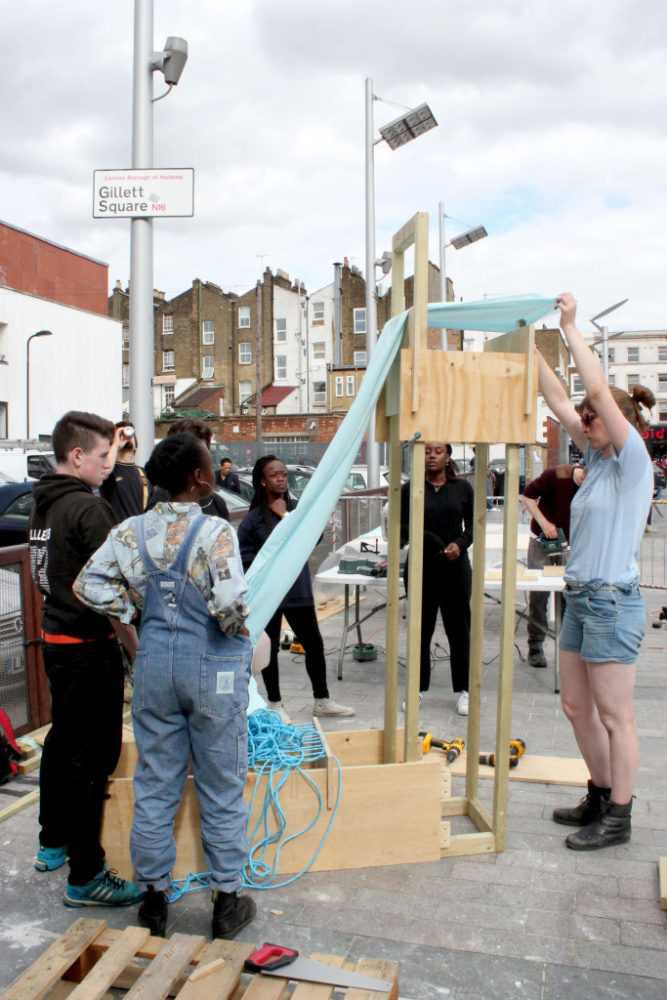 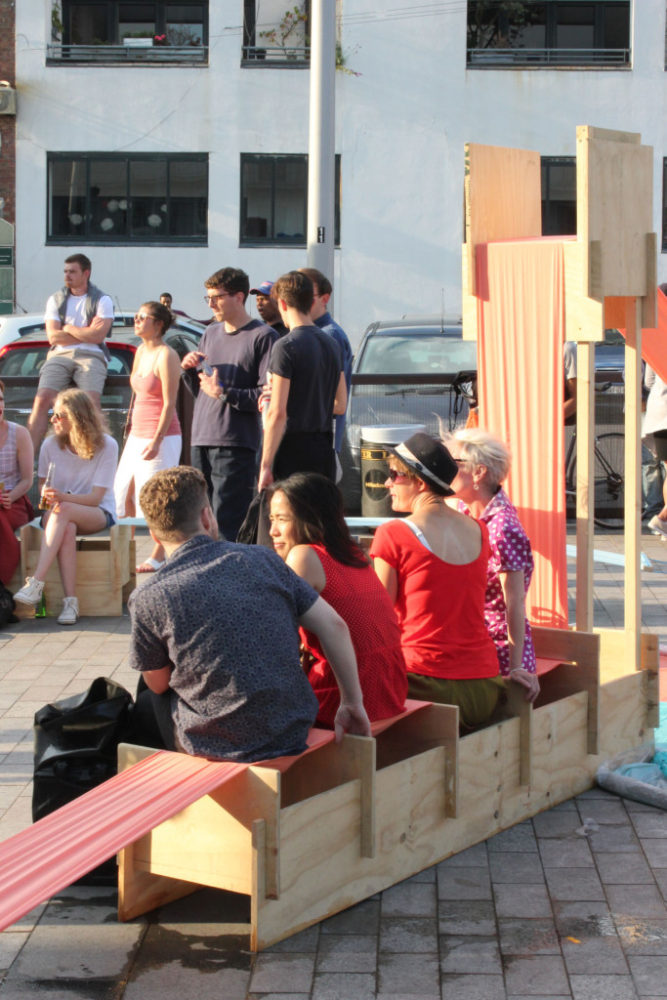 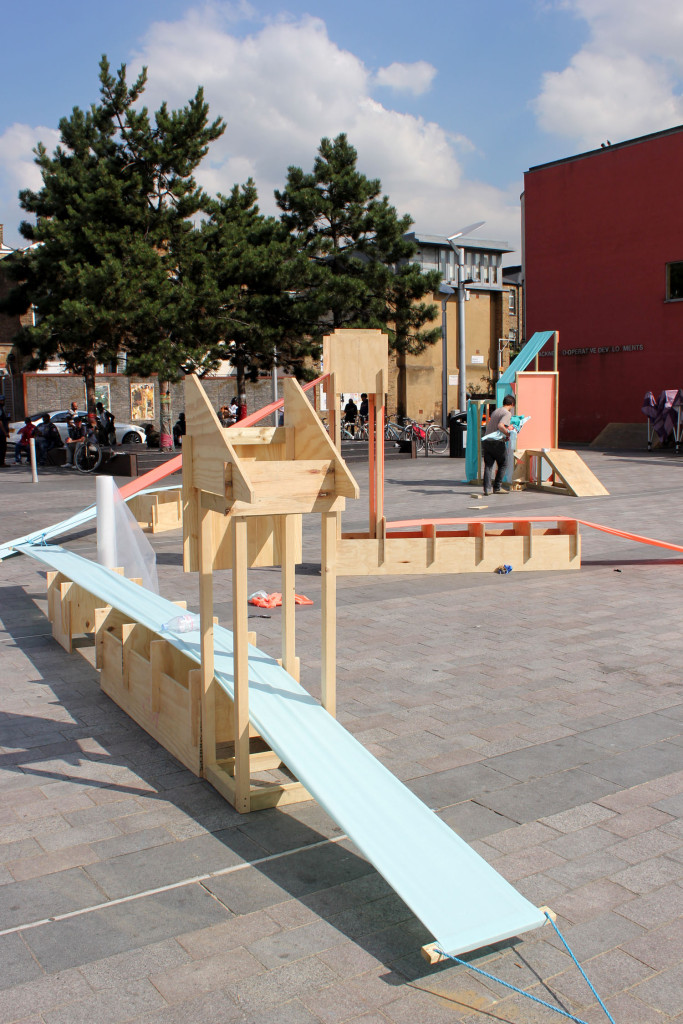 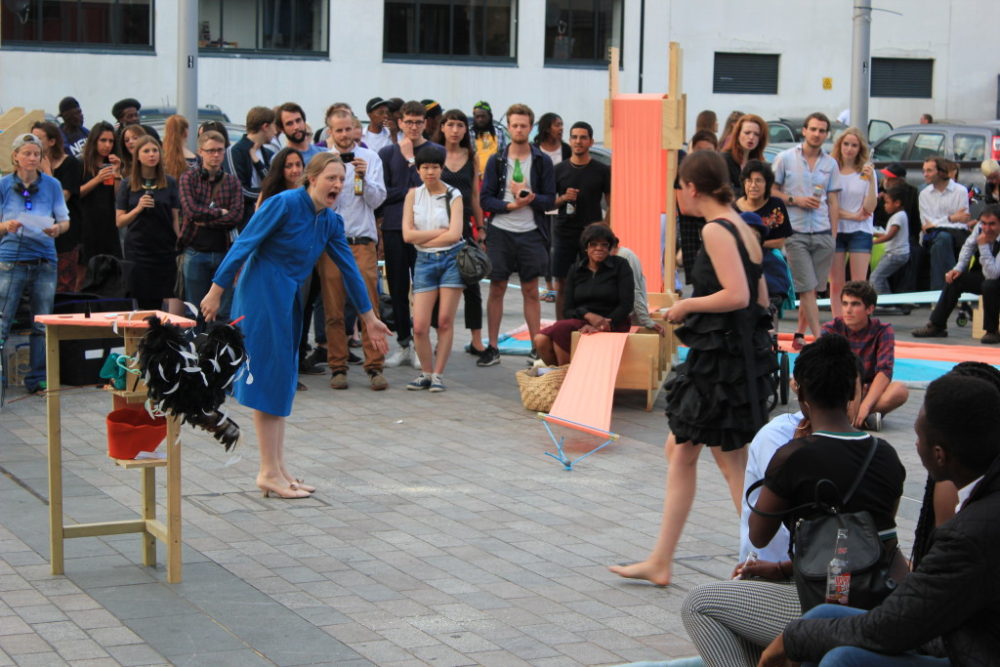 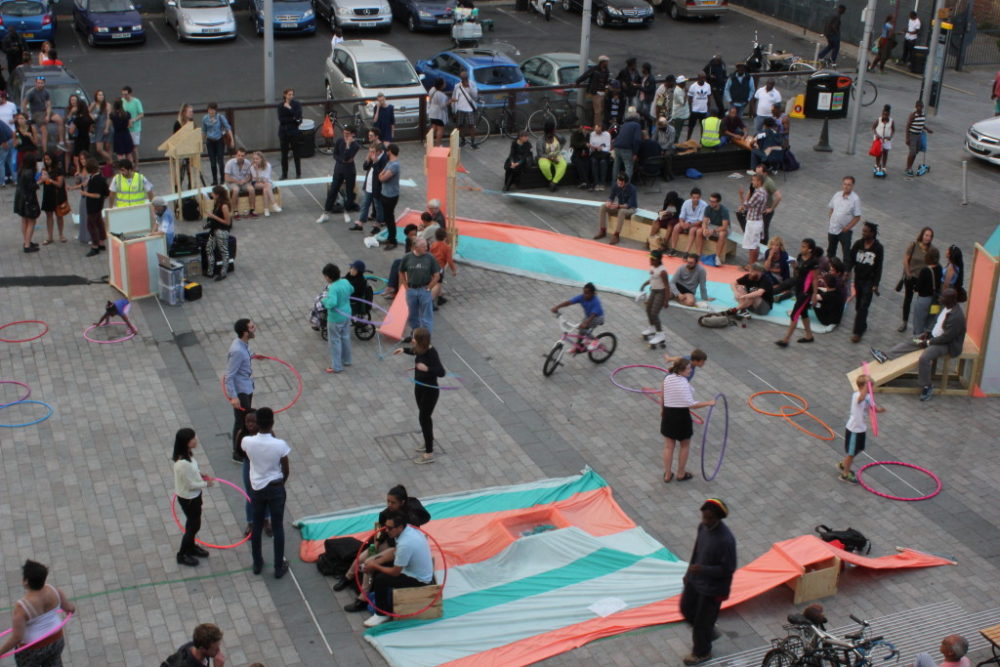 The third annual STORE London Summer School in Art & Architecture challenged students to design, construct and arrange an open air stage in over two weeks in Dalston’s Gillett Square. Working closely with performance artists Firdaws Fourcroy and Paulina Lenoir, and with the support of Hackney Co-operative Developments, students tailored a collaborative design to the performers’ script and the complex dynamics of the square. A stage ‘in the round,’ that is encircled by the audience, can create a complex and immediate critical relationship between performer and viewer. Throughout the Summer School, students rehearsed, prototyped and built in the square itself, in full view of the general public. In this sense, students were encouraged not just the final show, but the workshop itself as ‘in the round,’ continuously testing the relationship between architecture and performance in a challenging urban environment.

Gillett Square is a uniquely diverse public space in the heart of Dalston. The square is at the centre of a rich culture

of music, performance and artistic activity in the Vortex Jazz Club, Dalston Culture House and Stamford Works Studios. Just off the busy thoroughfare of Kingsland High Street, people come here to skateboard, drink coffee, play backgammon, argue, listen to music and hula-hoop. From the start, students were encouraged to consider the potential of the entire square to act as their theatre. To help make sense of its complexity, the Summer School began with a series of blind drawing exercises. Eyes shut, students were forced to rely on memory and their remaining senses to distil the essential features of the square. Building on these alternative observations, students created a series of site maps charting pedestrian movement, wind flow, sound and gradients, key environmental factors which would go on to inform the situation of their proposals.

Before design work began in earnest, collaborators Firdaws Fourcroy and Paulina Lenoir encouraged students to consider complex relationships between audience, performers and set through a series of performance exercises. A basic script was rehearsed, before students considered creative disruptions to each others’ scenes. As well as testing the innate theatrical and acoustic qualities of the Square, students tested mechanisms for audience interaction. Finally, students were provided with the script for Firdaws and Paulina’s final performance, which would go on to form the brief for stage and seating.

Considering Firdaws and Paulina’s script as a sequence of qualitative moments, students were encouraged to propose a particular audience-performer relationship for each scene. From these investigations emerged a network of seating, stage platforms, screens and ground surface treatments, carefully positioned to amplify and disrupt existing through routes and sight lines noted in our early site drawing exercises. Moving quickly from scale models to physical prototypes, students presented their concepts in a design crit with the Square’s management team, Hackney Cooperative Developments, and representatives of the Bow Arts Trust.

Construction took place in an outdoor workshop, cordoned off in the middle of the square. This constraint required students to arrive at design solutions that could either be safely left out at night, or packed away in a shipping container. Ultimately, students arrived at a hybrid solution: stage platforms double as skateboard ramps by night, while slotted plywood seating could be packed flat each evening. The entire construction process took place firmly in the public eye. As well as presenting their ideas to key stakeholders and performers, students were consistently drawn into informal conversations about their ideas with the general public, ensuring that end users were ever present in design discussions.

Just in time for Saturday evening’s performance, students completed an assemblage of ramped platforms, slung fabric seating and shallow, sand-bag lined pools to define a network of playful performance spaces at the heart of the square. Headlining a programme featuring local musicians, Firdaws Fourcroy and Paulina Lenoir provided the final act of their collaboration with students as they presented ‘Serge & Eugene,’ a performance of contemporary clowning partially improvised in response to the uniquely constructed setting.