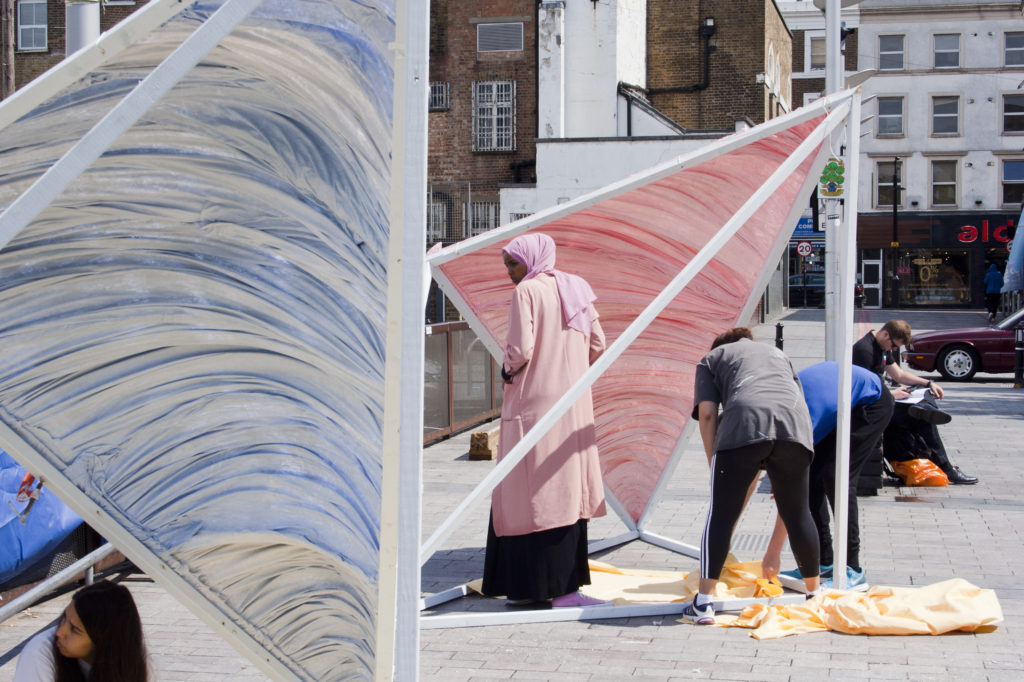 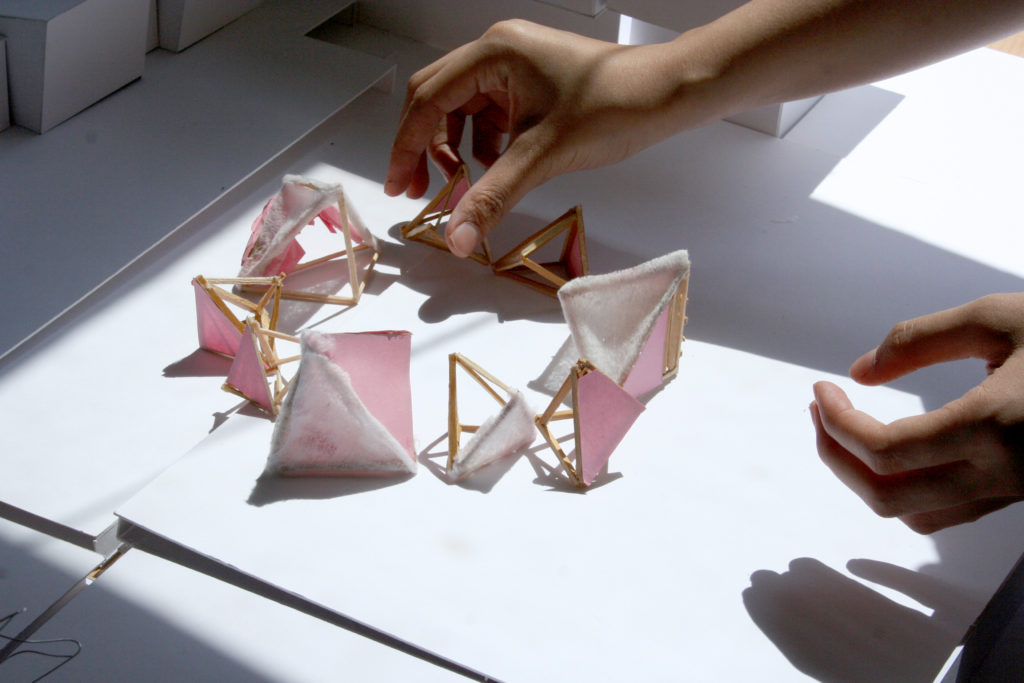 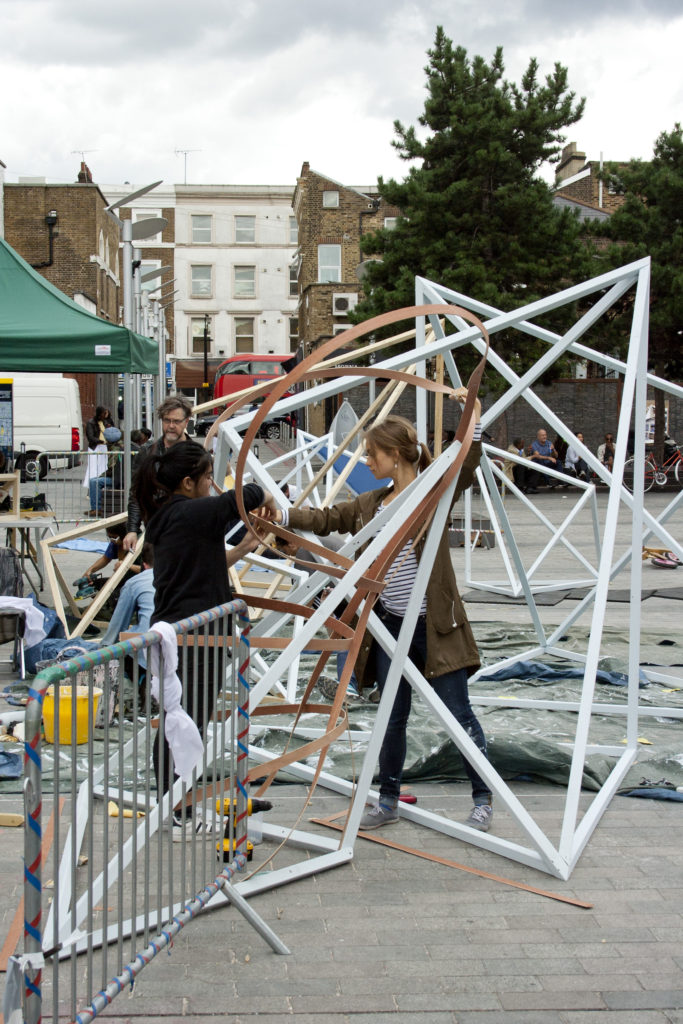 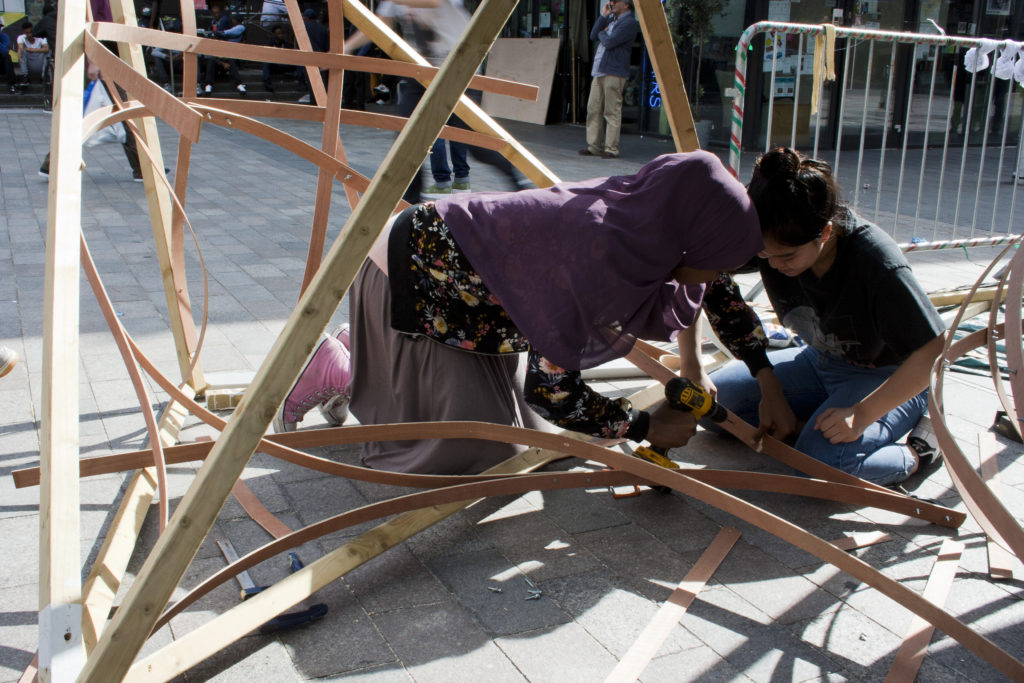 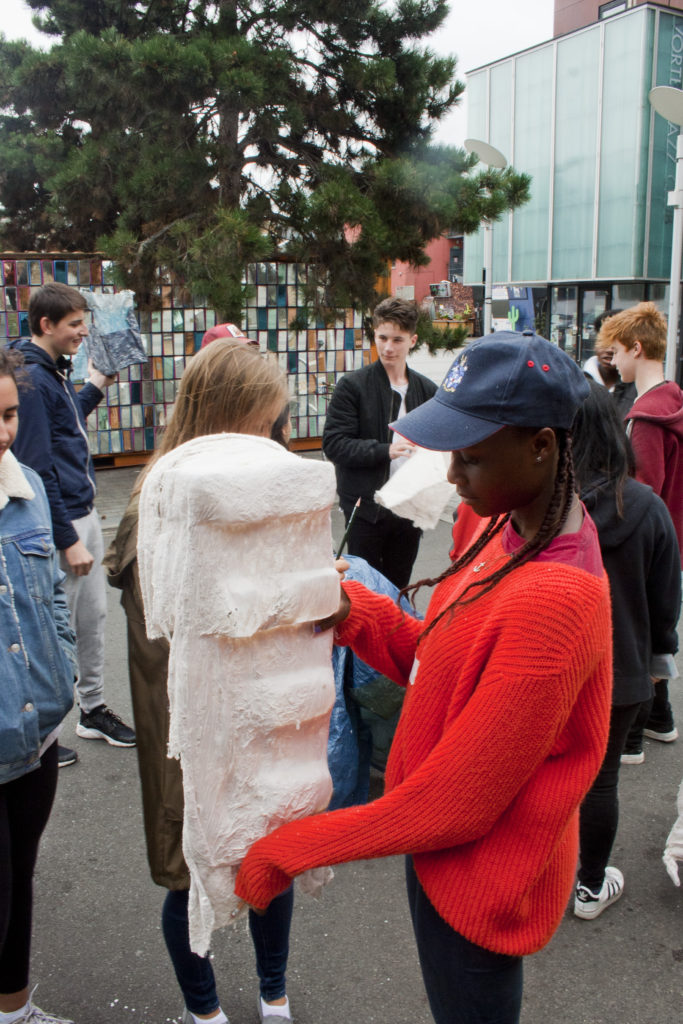 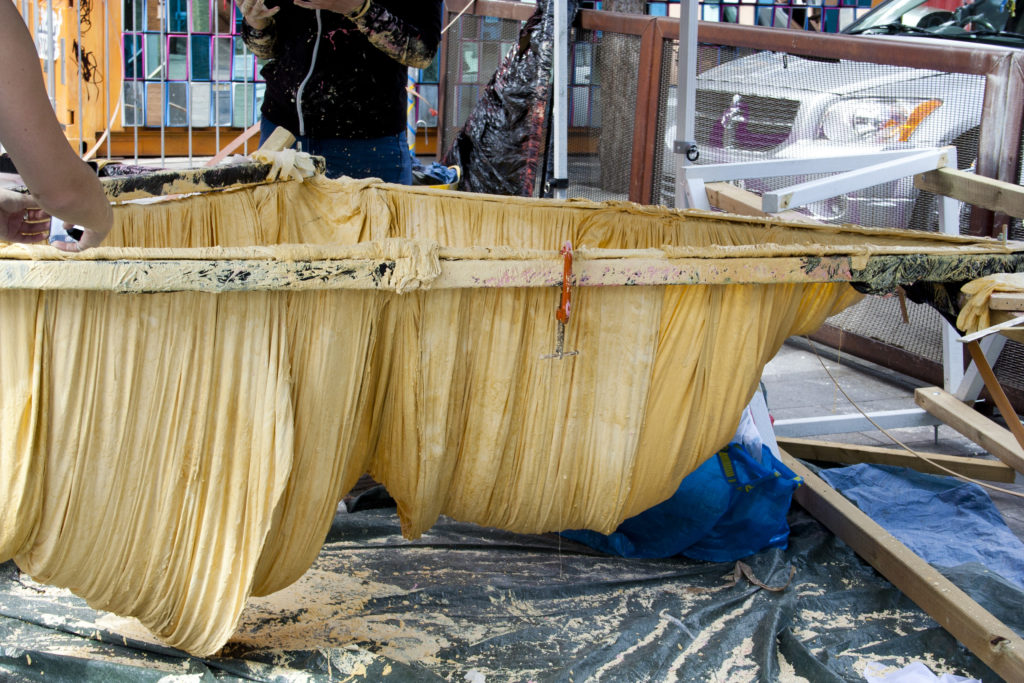 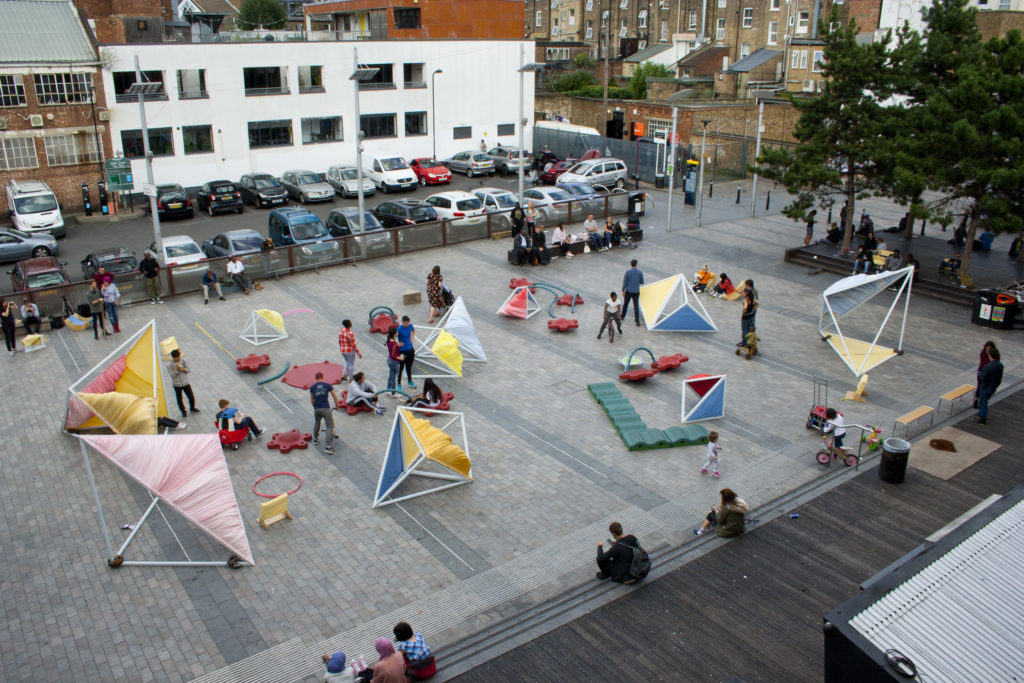 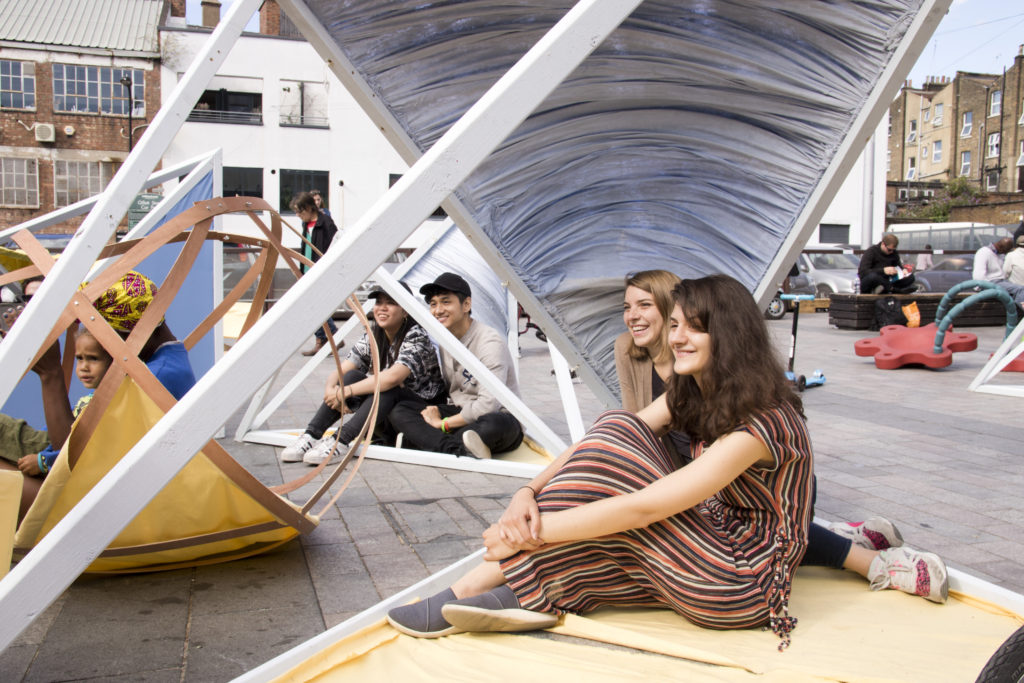 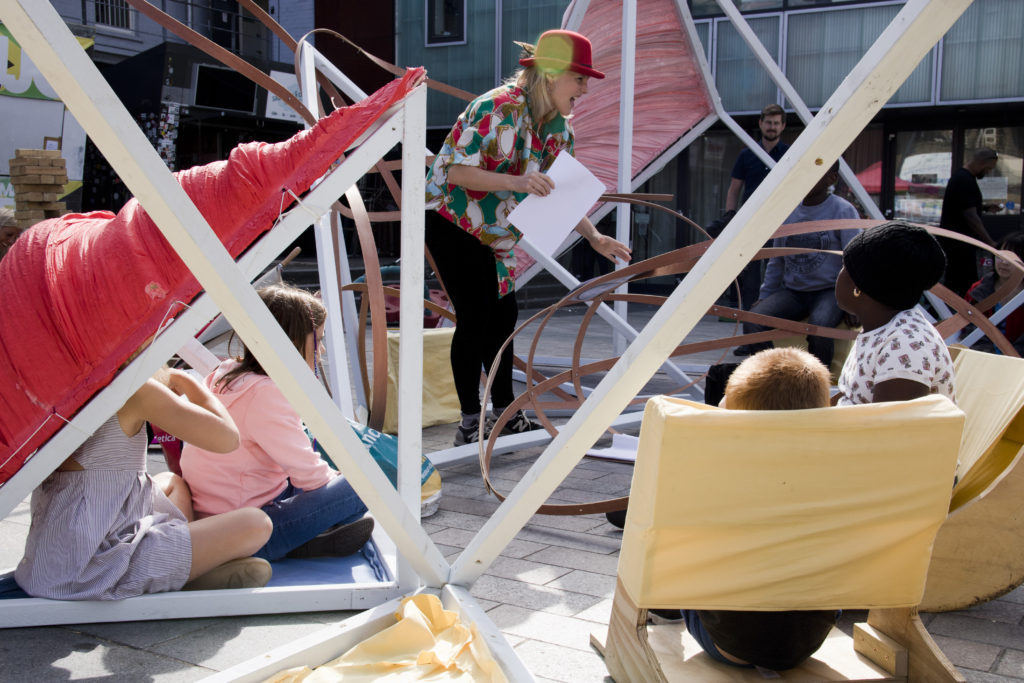 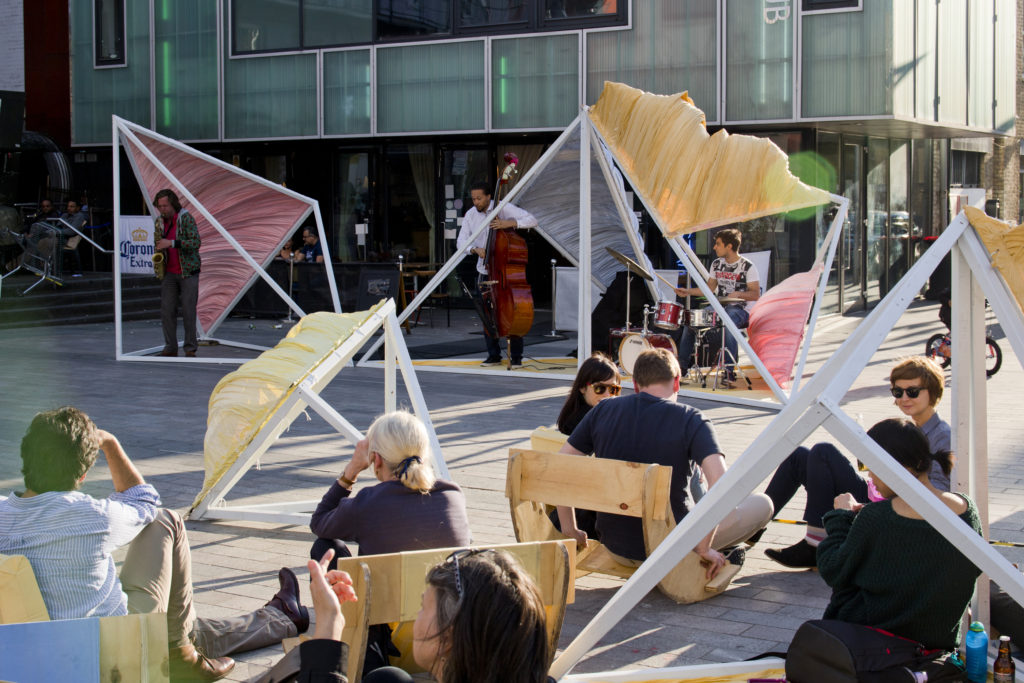 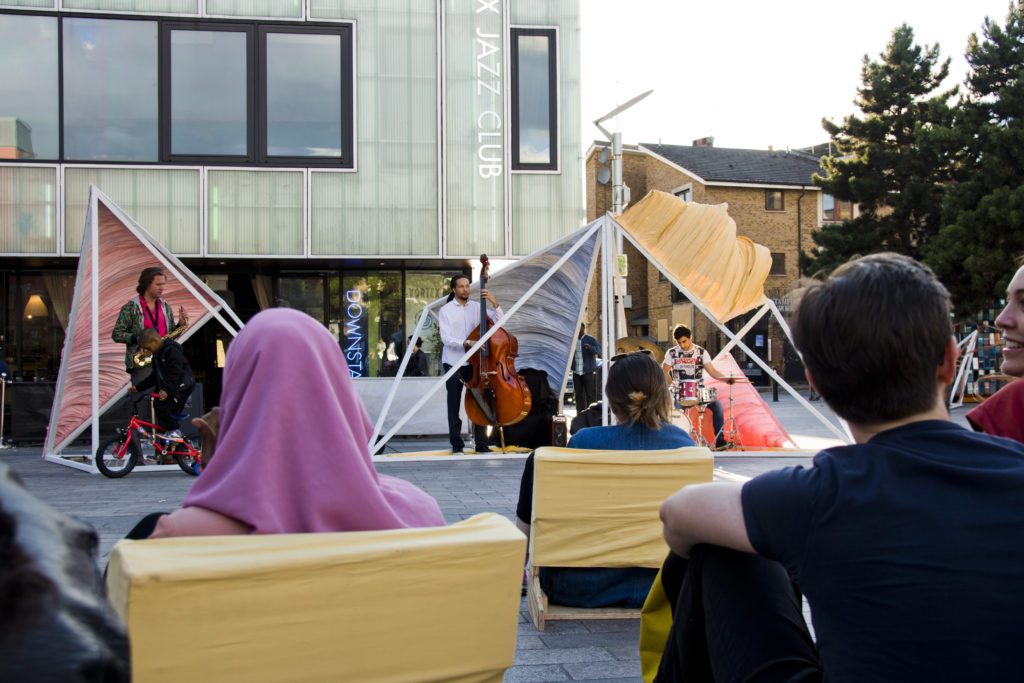 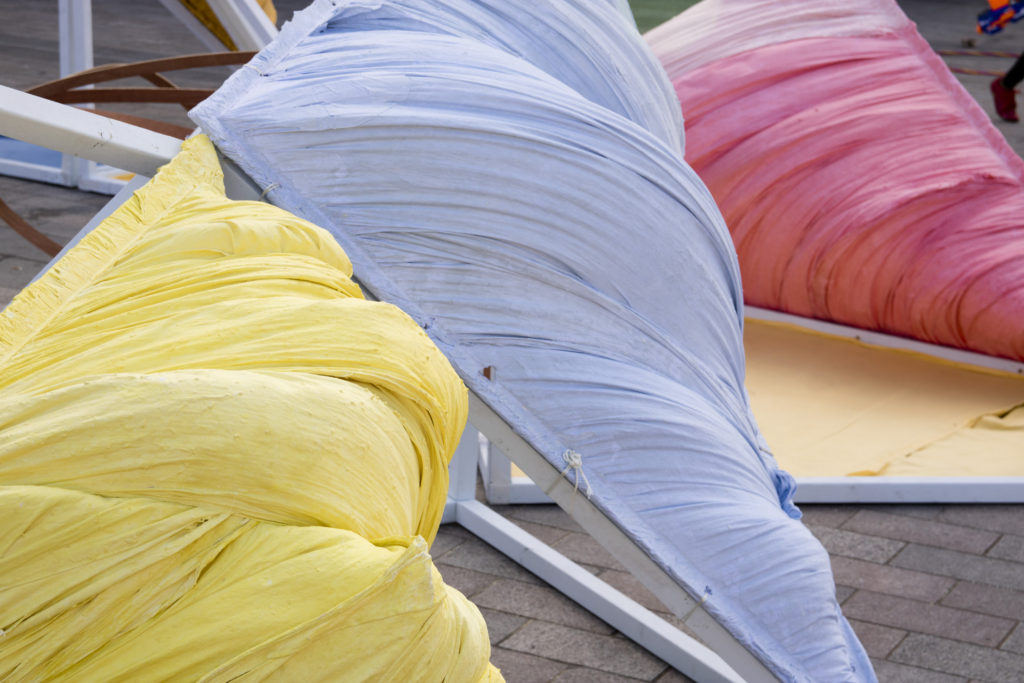 A day in the abundant life of Gillett Square is likely to feature hula hoopers, skateboarders, boxers, old men playing dominoes, live jazz music, loud arguments between old friends, commuters passing through, and locals stopping to enjoy their lunch or simply pass the time. For the third consecutive year, the STORE London Summer School immersed students in this uniquely rich urban environment during a two-week collaborative design and construction project. The Square is at once our site, classroom and workshop. Students were challenged to identify patterns in the Square’s perpetually shifting social and spatial dynamics. Their observations informed the design, construction and orchestration of a one-day celebration of Gillett Square in three acts, each animated by a creative collaborator, in a programme that is at once playful, inclusive and provocative. Through considered response to Square’s shifting daily patterns, and in dialogue with our collaborators, students aimed to create distinct spatial qualities to match each act of the Gillett Suite: Play, Storytelling, music.

Simultaneously acquainting our students with casting techniques and the intimate topography of Gillett Square, we began the course by moulding impressions of selected corners and surfaces using fabric-reinforced Jesmonite. A non-toxic composite of minerals and acrylic resin, Jesmonite allowed us to quickly create robust, detailed casts. By experimenting with a range of reinforcing fibres, from fine cotton to synthetic wadding, and different mix ratios, students developed an understanding of a key material process that would allow the creation of large, lightweight shell structures for the final event. Students quickly learned the improved strength of curved, pleated or laminated casts, techniques for fixing substrates and the importance of allowing due curing time. At the same time, students keenly observed the textures of the Square’s fabric, and began to experience the challenges of working directly in a public environment. The exercise resulted in a rich palette of found forms to reinterpret through design development.

Alongside conventional notation in plan drawing, students recorded sketches of activity and movement by creating small-scale animated flip-books. Observations varied in scale and duration from covert gestures to traffic patterns. In the process, students became familiar with prevailing routes and territories, and traced relationships between the physical environment of the Square and related social dynamics. Key observations were transposed onto site plans to inform the layout and orientation of the final event architecture. As an introduction to orthographic drawing conventions, students were asked to draw our collection of site casts to scale in plan, elevation and section. Students went on to consider the inhabitation of these found forms at 1:20 and 1:50, playing with scale to generate a set of early conceptual proposals.

Borrowing forms from earlier site casts, students were asked to individually develop scheme models in three phases, demonstrating how a limited set of forms could be re-oriented, re-arranged and re-adapted to create three distinct spatial experiences within the square: first expansive and playful, then secluded and comfortable for story-telling, before opening into a demonstrative, projecting stage arrangement for the culminating musical performance. These models, together with accompanying drawings and site observations were presented to a panel of critics, including the participating community groups and performers for our final event. Our collaborators’ invaluable feedback encouraged students to keep in mind practicality and comfort of the end users of their designs. Models were documented through stop-motion animation, again compelling students to consider their proposals as dynamic, time-based interventions.

In order to scale up some of the ideas explored through models, students were introduced to a range of techniques for working with timber. Using thin plywood strips, we rapidly prototyped lightweight dynamic structures, including a pop-up tunnel, a geodesic dome and a variety of seats. The fragility of the individual strips compelled students to work carefully and deliberately with properties of tension and compression to create resilient structures. In parallel, we developed a modular softwood framework based on early development models. Site testing of this irregular polyhedral structure saw children immediately adopt it as a climbing frame, while its geometry would allow it to sit stably on multiple faces, allowing for re-orientation between acts. The softwood polyhedron became the organising module for our scheme. As well as a set of mobile structures in their own right, this geometrical framework became our armature for bending stripwood forms and draping Jesmonite casts.

an arrangement for each of the three phases, this encouraged students to consider the transitions as equal components of an overall performance. Group discussion identified an emerging set of forms and principles suitable for prototyping (see overleaf). Meanwhile, an overall masterplan and set of stage directions continued to develop in parallel, each iteration incorporating further understanding from our material tests.

Moving on from our initial site casts, students used their understanding of the material to develop their own formwork, with a view to testing forms explored in concept models. We experimented with varied fabric reinforcements, draping, applying and dying the cast pieces. The structural advantages of smoothly draped curves, with multiple bunches, ridges and pleats quickly became clear. Using the triangular sides of our softwood polyhedra as a supporting framework, we cast a series of draped Jesmonite components. With each cast, the mix and technique were refined and perfected.

After two weeks of intensive design, prototyping and construction, the event architecture of the Gillett Suite was at last complete: a set of 12 polyhedra in three sizes, three stripwood seating cocoons and a storyteller’s chair. Polyhedra were clad in places with panels of draped Jesmonite and fabric, allowing them to form enclosure, seating and a backdrop respectively in each successive arrangement. Students were on hand to set out and manoeuvre their creations through sequences planned and rehearsed through models. First a landscape of scattered climbing frames, tunnels and caves augmented the Square’s own set of play furniture. Children hid within, ran through and climbed on

our polyhedra. For the next act, the polyhedra were brought together in the centre of the Square, distanced from the predominant sources of noise around the perimeter. Jesmonite shells faced outwards, with fabric sides on the floor to create a comfortable seating area, framing our stripwood cocoons. An intimate, comfortable but stimulating environment allowed imagination to run free as stories written by young students of the Hackney Pirates were performed. In the final act, the three largest polyhedra shifted to the edge of the Square to form a bandshell. Their parabolic Jesmonite shells aimed to help our acoustic jazz trio to project their sound into the Square, where the remaining smaller polyhedra punctuated the audience. Finally, as the Suite came to a close, we cleared the Square. Each item of the Gillett Suite was adopted by a local resident and taken home, leaving the Square clear for the next cycle to begin.